The Community of Writers is mourning the loss of our founding Board Member, friend and supporter, Burnett Miller.

Burnett made the Community of Writers possible since its earliest days. It’s a lucky thing for us, in the first place, that he and Mimi have always had a house in the Valley, and it’s a lucky thing for us that they’ve been such champions of the arts, including literature. In the city of Sacramento, Burnett and Mimi have been longstanding pillars of the cultural scene, and to Squaw Valley they brought the same warm enthusiasm and stewardship that they provided the Sacramento region.

Here is how the Sacramento Bee begins its remembrance of Burnett:

Burnett Miller survived shrapnel wounds at the Battle of the Bulge, helped liberate a concentration camp — and recounted his war stories for an acclaimed PBS documentary. After returning home to Sacramento, he spent his business career running a millwork and cabinetry company founded by his ancestors shortly after the Gold Rush.

He helped save historic Old Sacramento buildings from the wrecking ball, and was founding member of an annual conference at Lake Tahoe that mentors aspiring poets and writers. He rode camels in Iran and, until recently, played tennis with one of America’s most celebrated painters.

Oh, and he served as Sacramento’s mayor for about a year.

The city of Sacramento would be a plainer place today if not for Burnett’s work on behalf of its great museums, parks, historic buildings, arts organizations. And as a summer resident of this unincorporated resort village in the mountains, he may not have been the mayor, but he had his hand on the tiller of the Valley’s major cultural institution. As Chairman of our Board of Directors, Burnett for many years sat at the head of the table, knowing when to intervene and change the subject but also – and mostly – practicing the art of listening with an intense empathy. Wherever Burnett was, things flourished. We remember one August, when, on the post-conference day after all the participants had gone home, a few of us administrators were beginning the packing-up process, in our morning-after fatigue – and then the Chairman of the Board arrived, with a spring in his step. And with, also, the slight hitch in his walk that came along in his eighties, he started picking things up and churned everyone into action, making decisions about sorting office equipment for winter storage, carrying off boxes or computer printers. It was Private 1st Class Miller, the one who led a patrol in the Battle of the Bulge.

Burnett must have seized on the Community of Writers (and, by the way, made lifelong friends of us all) because he was at heart an intellectual. He may have been a practical politician and a businessman, and those are two callings that don’t like overly highbrow pursuits or fancy tastes – businessmen and politicians have good reasons to, rather, be known as down-to-earth. But in Burnett’s home, the freshest “New York Review of Books” was always out on the coffee table, and it had obviously always been ransacked, its tabloid folds disheveled. The walls of all the rooms and staircases in that house are covered chockablock, salon-style, with oil paintings by contemporary artists, and new hardcover fiction and nonfiction stands on end tables, bookmarked. He and Mimi showed up at every one of the summer conferences, attending lectures and readings stylishly dressed and seated in the very front row. Burnett knew how to be a bon vivant, often buying a bottle to go around, and sometimes ruling a dinner table with his beautifully told stories. He had plenty of stories to tell. His patrol in the Ardennes forest walked “on point,” meaning at the brunt. He was one of the American officers who personally, literally, opened gates at the Mauthausen concentration camp, while prisoners on the other side watched him do it. And all their lives, he and Mimi have been adventurous world travelers, not the kind of tourists who merely ride and eat, but explorers seeking out hard-to-get-to places, and places without amenities. His stories were always masterpieces. His destiny was to work largely in the business and government worlds, but he may have been an artist or writer manqué – as if, maybe, had there been no “Burnett & Sons” (fine millwork and planning, founded 1869), he might have been an editor or critic, one of us ink-stained wretches. We’re fortunate that one of Burnett’s greatest arts was making everybody else’s life brighter.

Read more about Burnett in the Sacramento Bee.

If you are interested in honoring Burnett’s long 50 year history with the Community of Writers with a donation, please go here. 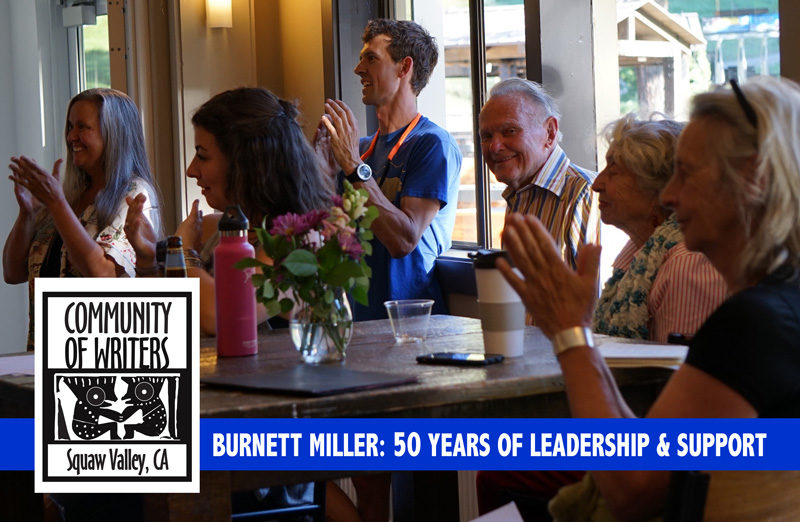