David Perlman, the last of the three founders of our conference, has died, at the age of 101, in San Francisco. Fifty years ago here, editor Blair Fuller and novelist Oakley Hall were regularly spending their summers in the Valley, and David Perlman had a house here, too. It was a small village at the time, and people met up. Oakley had made a great reputation as a novelist; Blair Fuller was an editor at The Paris Review, and the three of them decided to have some fun inventing a week-long summer writers conference. Anne Perlman – who preceded her husband in death by two decades – was a serious, accomplished poet, who had been very respectably published, and in the early days she worked on the Poetry program with Galway Kinnell and Phil Levine and Mark Strand.

Originally a New Yorker, graduate of Columbia, David fell in love with San Francisco early, and migrated early. His first job on the West Coast was as a copyboy at the Chronicle. That was 1940. After WW II military service, he spent some time in Paris and New York, writing for the New York Herald Tribune, but soon devised a way back to San Francisco, where he got hired at the San Francisco Chronicle as a reporter.

He retired from the paper only three years ago, at 98, having worked full-time all those years. He kept arduous regular hours even deep into his 90s, spoke until the end with sharp wit and a rich understanding of the world, and even walked with a spring in his step. On his last day at the Chronicle, he decided to allow himself the unprecedented luxury of leaving fifteen minutes ahead of time, and went to his editor’s office to say he was going to “slide early.” But he was of course noticed slipping out, and everybody in the newsroom got to their feet applauding.

David and Anne gave up their house in Olympic Valley at some point. After that they seldom came up to the workshop, but he always thought of this organization as one of his happiest achievements. The thing he loved most, which kept him at his desk in San Francisco, was explaining science to readers. Elucidating our tectonic jolts, AIDS, moonshots, climate change, he earned a reputation over the years as a “dean of science journalism,” having resolved in his twenties that science journalism was “the most glamorous thing in the world.”

The last story he filed for the Chronicle was a typically long piece (the Chronicle always gave him plenty of space, all he wanted), explaining the total eclipse of eclipse of the sun.

Daylight will turn to midnight. The summer air will turn chilly,
birds will chirp uneasily in the unexpected darkness and the stars will emerge. 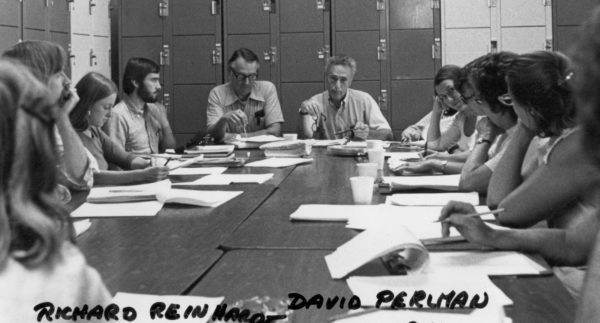 This summer as the Community of Writers comes together as we have done for 50 years, we do so at a time of urgently needed social and political change. We honor the scores of Americans who have taken to the streets to protest the systemic racism and injustice.

It has always been our goal to create, out of our summer meetings, a community that nourishes and supports a diversity of writers and poets at all stages of their development. We are a seasonal gathering, each member belonging to other home communities, aligned with other institutions. There, many of us are deeply engaged in the streets, classrooms, community centers, the halls of government and, of course, as we are writers, on the page.

Part of our mission has been to erase obstacles for emerging writers, especially Black writers and poets, to attend a workshop such as ours.
In light of recent national debates surrounding equity and systemic racism, we are even more committed in our efforts to build new, and sustain current essential partnerships which will help us reach deeper into underserved communities to find poets and writers with voices that contribute to the diversification of the country’s narrative.

We will continue to do what we have done that has worked – raise funds to support writers of color, especially Black writers, and work to further diversify our board and staff. We will also look at those policies and practices, formal and informal, that have weakened these efforts. We will examine the Community’s culture that allows for participants to experience exclusion, disrespect, and microagressions at all levels of our organization, including, but not limited to, the workshop itself.

As part of our ongoing evaluation, we changed the name of our conference, previously scheduled to have been announced this Spring at our anniversary celebrations. Just as protesters and social justice advocates have called for the dismantling of Confederate symbols and statues because of their racist connotations, we recognize the painful and derogatory legacy of the word “squaw” as a slur, a word that is disrespectful to the Native American Community. We acknowledge that this word is offensive, that it goes against everything we stand for and believe, thus, we will no longer be branding ourselves as such and will now be known as the Community of Writers.

We are grateful to the participants and staff who care enough about the integrity of the Community to have communicated their concerns with us.  We hear you.

We have always felt that what we were doing addressed the multicultural life of this country in deep ways and we have reason to be proud of the stories, poems, essays, films that have been produced over fifty years by the staff and participants in this community, including work by some of our most gifted Black, Latinx,  Asian American writers, disabled and LGBTQ+. This last painful month has made it clear that, whatever we have been doing, it hasn’t been enough. Just as it hasn’t been enough not to be racist or to practice modest and benign forms of affirmative action. New behaviors require new visions. Our mission is to support new visions and we have work to do.

-The Community of Writers