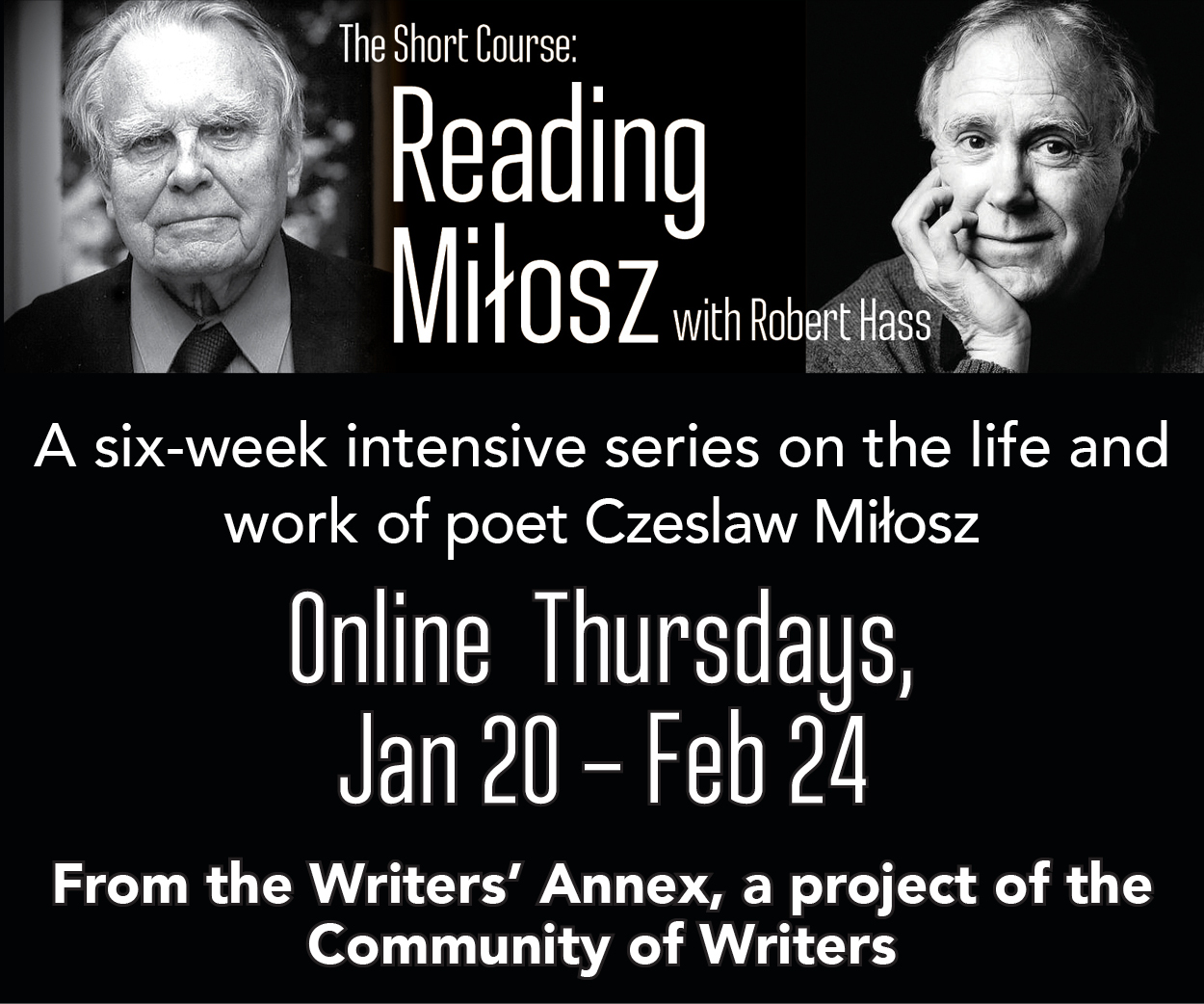 The Community of Writers is honored to present a six-week intensive series on the life and work of poet Czeslaw Milosz taught by Pulitzer Prize-winning poet Robert Hass.

Czeslaw Milosz, who won the Nobel Prize for literature in 1980 and is generally regarded as one of the great poets of the twentieth century, produced a large and various body of poetry.  His friend and neighbor Robert Hass worked with him on the translation of his poems for more than twenty-five years. Many of those make up the body of work collected in Czesław Miłosz, New and Collected Poems, a compilation which takes us across much of the intense life of the European twentieth century, in a poetry that uses ceaselessly inventive techniques and approaches to a range of subjects.

How does the poetry of Czeslaw Milosz read in the early twenty-first century?  This intensive series offers a chance to read through this brilliant and challenging body of work guided by former director of the Community of Writers’ Poetry Workshop, Robert Hass. Our host will be poet Jesse Nathan, who will moderate and join the discussions.

This short course is for anyone who has an interest in reading or writing poetry.  All are welcome.

Recordings:
These sessions will be recorded, and will only be available for later viewing (within two weeks) by registered participants.

Note from Robert Hass: This is a massive body poetry to consider. (We will set aside the two novels, Seizure of Power and The Issa Valley, the famous book about politics, The Captive Mind, and the memoir, Native Realm.) So I will be expecting members of the class to read around in the Collected Poems, following their own taste and curiosity as well as the poems I explicitly assign. In our meeting we hope to concentrate on some of the very rich longer poems and hope there will be time for members of the class to point to other poems that strike them.

Poems to think about: “Song,” “Encounter,” “The World,” “Voices of Poor People,” “Dedication”

Poems: “Song on Porcelain,” “Mid-Twentieth-Century Portrait”,” Mittelbergheim,” “A Treatise on Poetry”, especially the sections “The Spirit of History and “Natura,” “Esse”

Poems: “Throughout These Lands,” “Bobo”s Metamorphosis,” “City Without s Name,” and “With Trumpets and Zithers”

Poems: “From the Risings of the Sun”

Poems: “A Magic Mountain,” “Study of Loneliness,” “The Separate Notebooks,” “Bypassing Rue Descartes,” all of “Unattainable Earth,” esp. “The Garden of Earthly Delights,” “After Paradise,” “The Hooks of the Corset,” “Annalena,” “Elegy for Y. Z.,” “Yanka,” “Theodicy,” ‘To Find My Home’

Jesse Nathan’s poems appear in Paris Review, Kenyon Review, The Yale Review, The Nation, and American Poetry Review. His work has been supported by fellowships from Bread Loaf, the Ashbery Home School, the Kansas Arts Commission, and the Andrew W. Mellon Foundation. Nathan has a PhD in literature from Stanford. His interviews with writers are included in the series “Short Conversations with Poets,” published by McSweeney’s, and he’s a founding editor of the McSweeney’s Poetry Series. Nathan is an alum of  the Poetry Workshops at the Community of Writers, and is a lecturer in the English Department at UC Berkeley.