SkyLight Books Hosts a Group Reading to celebrate
Why To These Rocks: 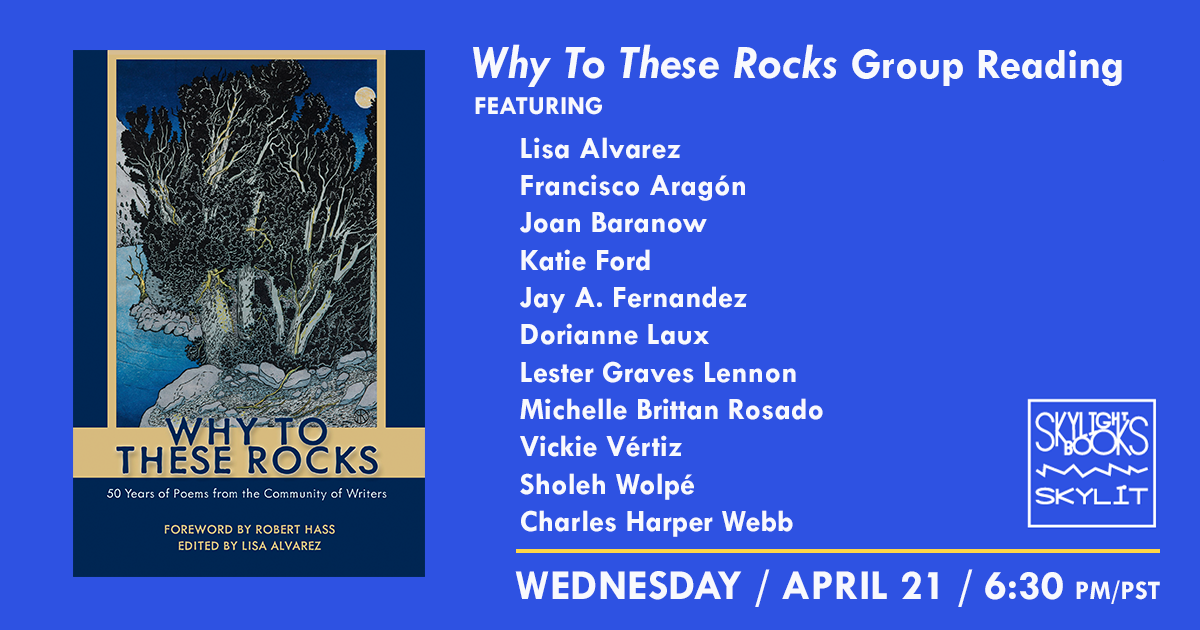 50 Years of Poetry from the Community of Writers

Virtual event on Crowdcast. Registrants will be sent a Crowdcast link upon registration.

Lisa Alvarez has edited two landmark collections: Writer’s Workshop in a Book: The Community of Writers on the Art of Fiction with Alan Cheuse and Orange County: A Literary Field Guide with Andrew Tonkovich. She is a fiction writer and poet whose work has appeared in Huizache, PANK, Santa Monica Review and others. Her commentary has been featured in the Los Angeles Times. She teaches writing at Irvine Valley College and co-directs the Community of Writers.

Francisco Aragón is the son of Nicaraguan immigrants. After Rubén, his third book, was published last year by Red Hen Press. A native of San Francisco, CA, he directs Letras Latinas, the literary initiative at the University of Notre Dame’s Institute for Latino Studies. He taught at the Poetry Workshop  in 2017. For more information, visit: http://franciscoaragon.net

Joan Baranow is the author of In the Next Life, Living Apart, and two poetry chapbooks. Her poems have appeared in The Paris Review, The Gettysburg Review, Blackbird, Forklift OH, Poetry East, JAMA, and elsewhere. A VCCA fellow and member of the Community of Writers, she founded and teaches in the Low-Residency MFA program in Creative Writing at Dominican University of CA. With her husband David Watts she produced the PBS documentary Healing Words: Poetry & Medicine. Her feature-length documentary, The Time We Have, presents an intimate portrait of a teenager facing terminal illness. She attended the Poetry Workshop many times over the past three decades.

Katie Ford is the author of four books of poems, most recently, If You Have to Go (Graywolf Press). Her third, Blood Lyrics, was a finalist for the LA Times Book Prize and the Rilke Prize. Her second, Colosseum, was named among the “Best Books of 2008” by Publishers Weekly and the Virginia Quarterly Review, and led to a Lannan Literary Fellowship and the Larry Levis Prize. Her poems have appeared in The New Yorker, Poetry, The Paris Review, The American Poetry Review, and The Norton Introduction to Literature. She’s a professor at the University of California, Riverside. She taught at the poetry workshop in 2012.

Jay A. Fernandez is a Los Angeles-based poet, writer, editor, and book editor whose work has appeared in The Washington Post, ACLU Magazine, the Los Angeles Times, L.A. Review of Books, The Hollywood Reporter, Los Angeles, Boston Review, and many others. He attended the Poetry Workshops at the Community of Writers in 2018, the Fiction Program there in 2017.

Pulitzer Prize finalist Dorianne Laux’s most recent collection is Only As The Day Is Long: New and Selected, W.W. Norton. She is also author of The Book of Men, winner of the Paterson Poetry Prize and Facts about the Moon, winner of the Oregon Book Award.  She teaches poetry at North Carolina State and Pacific University. In 2020, Laux was elected a Chancellor of the Academy of American Poets. 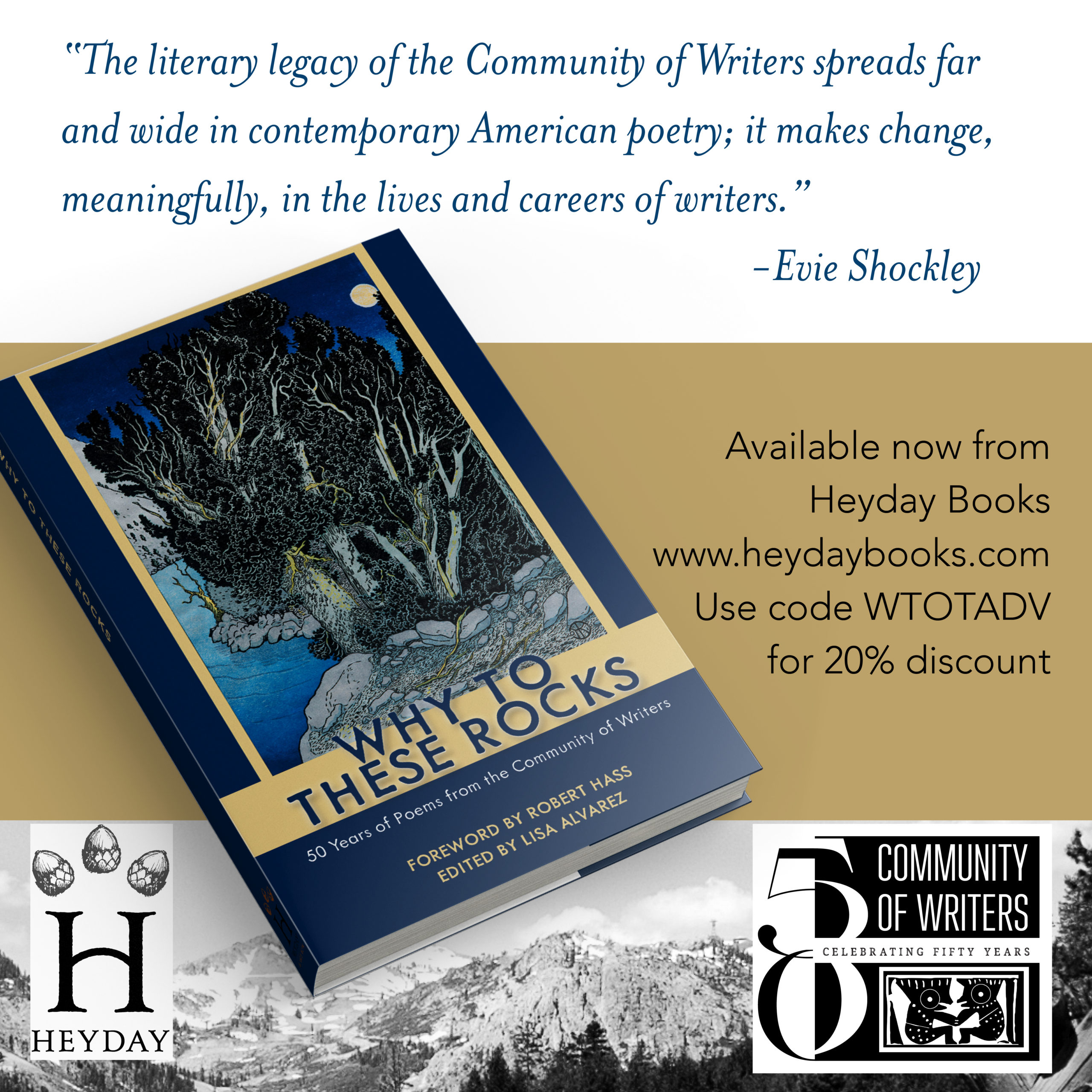 Lester Graves Lennon is a poet, editor, and investment banker. His first book of poetry, The Upward Curve of Earth and Heavens, is found in more than 70 public and university libraries including U.C. Berkeley, Yale, Harvard and Oxford. His second book, My Father Was a Poet, was published in the spring of 2013.  His third book, Lynchings: Postcards from America will be released in January, 2022. Lester is the Poetry Editor of Rosebud Magazine, a founding member of the Los Angeles Mayor’s Poet Laureate Task Force, a board member of the Community of Writers, and emeritus member of the West Chester University Poetry Center Advisory Board.

Vickie Vértiz is a writer from Bell Gardens. The oldest child of an immigrant Mexican family, Vértiz’s writing can be found in the New York Times magazine, the Los Angeles Review of Books, KCET Departures, and the San Francisco Chronicle, among many others. Her book Palm Frond with Its Throat Cut won the 2018 PEN America literary prize in poetry. A recipient of fellowships from the Mellon Foundation, VONA, CantoMundo, and Macondo, Vickie teaches writing at UC-Santa Barbara.

Sholeh Wolpé is an Iranian-born poet, playwright and literary translator. Named a “2020-2021 Cultural Trailblazer” by the City of Los Angeles Department of Cultural Affairs, Sholeh is the recipient of a 2014 PEN Heim, 2013 Midwest Book Award and 2010 Lois Roth Persian Translation prize. Her literary work includes five collections of poetry, several plays, three books of translations, and three anthologies. Her most recent publications include The Conference of the Birds (W.W. Norton & Co), Cómo escribir una canción de amor (Olifante Ediciones de Poesia, Spain), and Keeping Time with Blue Hyacinths (University of Arkansas Press.) Her new collection of poems, Abacus of Loss, is forthcoming from the University of Arkansas Press in March 2022. She attended the Poetry Workshop in 2004.

Charles Harper Webb has published twelve collections of poetry. His latest collection of poems, Sidebend World, was published by the University of Pittsburgh Press.  A Million MFAs Are Not Enough, a collection of Webb’s essays on contemporary American poetry, was published by Red Hen Press in 2016.  Recipient of grants from the Whiting and Guggenheim foundations, Webb teaches Creative Writing at California State University, Long Beach. He attended the Poetry Workshop in 1991.