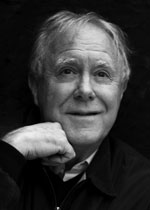 Robert Hass has published many books of poetry including Field Guide, Praise, Human Wishes, Sun Under Wood, and The Apple Trees at Olema: New and Selected Poems. His collection of poems entitled Time and Materials won both the National Book Award and the Pulitzer Prize. He has also written books of essays including Twentieth Century Pleasures, Now & Then, and  A Little Book on Form: An Exploration Into the Formal Imagination of Poetry. His book of essays, What Light Can Do: Essays on Art, Imagination, and the Natural World, is the recipient of the PEN/Diamonstein-Spielvogel Award for the Art of the Essay. Hass translated many of the works of Nobel Prize-winning Polish poet, Czeslaw Milosz, and he has edited Selected Poems: 1954-1986, by Tomas Transtromer; The Essential Haiku: Versions of Basho, Buson, and Issa; Poet’s Choice: Poems for Everyday Life; the 2001 edition of Best American Poetry; and Modernist Women Poets: An Anthology (with Paul Ebenkamp). He wrote the introduction to an edition of selected Walt Whitman poems titled Song of Myself: And Other Poems. He also wrote The Poetic Species: A Conversation with Edward O. Wilson and Robert Hass. His most recent book is Summer Snow: New Poems. He directed the Poetry Program at the Community of Writers for over 20 years.