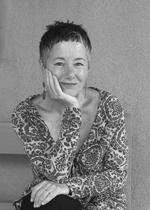 Veronica Golos: Veronica Golos is the author of two books, Vocabulary of Silence (Red Hen Press, 2011), winner of the 2011 New Mexico Book Award, poems from which are translated into Arabic by poet Nizar Sartawi, and available in over 24 journals throughout the Middle East. A Bell Buried Deep was co-winner of the 16th Annual Nicholas Roerich Poetry Prize, nominated for a Pushcart Prize by Edward Hirsch and is set to be re-issued by Tupelo Press in 2014. Golos’s poems are included in The Poet’s Craft, University of Michigan Press; Collecting Life, from 3: A Taos Press, 2011, and in journals in the US and internationally. Golos is Acquisitions Editor for 3:A Taos Press, and co-editor of the Taos Journal of Poetry & Art. www.veronicagolos.wordpress.com