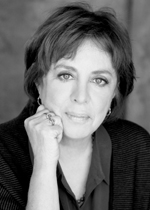 Stephanie Kegan is the author of the novel Golden State published by Simon & Schuster in 2015 and in trade paperback in 2016. Her previous books include The Baby, a novel published by the Berkley Publishing Group, and Places to Go with Children in Southern California, (six editions) published by Chronicle Books. Her nonfiction has appeared in Self, Los Angeles Magazine, the Los Angeles Times and elsewhere. She lives in Los Angeles. She attended the Community of Writers in 2003 and 2005.  www.stephaniekegan.com