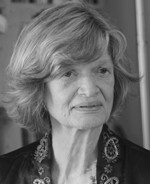 Sabra Loomis (’89/’91/’03): Sabra Loomis is the author of House Held Together by Winds, Winner of the 2007 National Poetry Series Open Competition as selected by James Tate (HarperCollins, 2008). She is also the author of Rosetree and two chapbooks of poetry. Her poems have appeared in literary journals and magazines including American Poetry Review, American Voice, Cincinnati Poetry Review, Heliotrope, Lumina, Cyphers, and St. Ann’s Review. Ms. Loomis has received awards from the Artists Foundation, the Yeats Society, and the British Council, as well as fellowships from Yaddo and the MacDowell Colony. She teaches frequently at the William Joiner Center at the University of Massachusetts, and was on the faculty of the Poets’ House, Donegal, for many years. Sabra Loomis divides her time between New York City and Achill Island, Ireland.