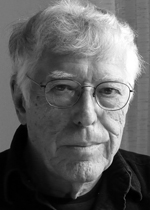 Richard O. Moore (’96/’97): Richard Moore, a documentary filmmaker for public television, was one of the founders of KPFA—the first publicly supported radio station in the United States. He was born in Alliance, Ohio, and attended the University of California, Berkeley, where he studied poetry with Josephine Miles. He was associated with the San Francisco Renaissance and frequented Kenneth Rexroth’s Friday meetings for poets, philosophers, and poetry aficionados. During World War II, Moore was classified 4-F and counseled conscientious objectors. He wrote poetry for decades but shared little of it until poet Brenda Hillman encouraged him to publish. In 2010, Hillman and Paul Ebenkamp edited Moore’s book Writing the Silences, a collection representing more than 60 years of his work. Moore’s early exposures to Miles’s teachings, Rexroth’s poetry, and philosophers such as Ludwig Wittgenstein all influenced his writing. Hillman, in her foreword to Writing the Silences, explains that “Moore developed a signature style of poetry: open, spare verse that foregrounds philosophical inquiry.” Writing the Silences was a Northern California Book Award nominee. Moore published his second book, Particulars of Place, in 2015. Moore passed away in 2015 at the age of 95 in Mill Valley, CA.