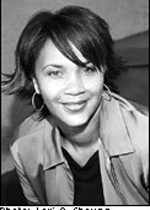 Regina Louise is the author of the bestselling memoir Somebody’s Someone. She has been featured on NPR’s “All Things Considered,” as well as The CBS Early Show. Regina’s story has also garnered nationwide attention in newspapers and magazines including San Francisco Chronicle, Los Angeles Times, and The Philadelphia Tribune. She optioned her story for film and a play, which premiered May 2007. www.reginalouise.com