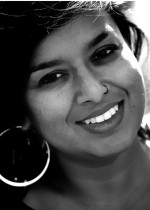 Nayomi Munaweera’s debut novel, Island of a Thousand Mirrors won the Commonwealth Regional Prize for Asia and was short-listed for the DSC Prize for South Asian Literature and the Northern California Book Prize. She lives in Oakland, California, and her second novel, What Lies Between Us, was released in February 2016. She attended the Community of Writers in 2011 and 2012.  www.nayomimunaweera.com