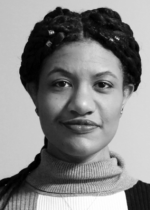 Megan Fay Raveneau is a staff writer in the writers room for a yet-to-be-announced Netflix adult animation series, where she leads break-out room discussions on character and episode development. Prior to securing that much-coveted position, she wrote on staff for a Disney Junior television series. Megan also has worked as a freelance screenwriter for several years, developing and writing screenplays for various production companies. She also assisted in television development at the Blumhouse production company. After receiving her B.A. in Film Production from Brooklyn College, she earned her MFA in the Writing for the Screen Program at Loyola Marymount University.