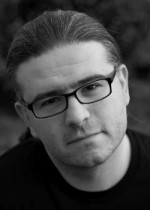 Ismet Prcic is a Bosnian American writer who is the recipient of a National Endowment for the Arts Literature Fellowship for fiction in 2010. His debut novel Shards — which was published by Black Cat (Grove, Atlantic) in 2011 — won several awards including Sue Kaufman Prize for First Fiction from the American Academy of Arts and Letters, Los Angeles Times Art Seidenbaum Award and Oregon Book Award. His work has been translated into nine languages. He is also a Sundance and a Jerusalem Screenwriting Lab fellow. He attended the Community of Writers in 2007, and has returned since on staff. www.ismetprcic.com