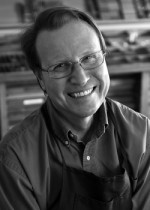 Gary Young is a poet and artist whose honors include grants from the NEH, the California Arts Council, and two fellowship grants from the NEA. He’s received a Pushcart Prize, and his book, The Dream of a Moral Life, won the James D. Phelan Award. He is the author of Hands, Days, Braver Deeds, (Peregrine Smith Poetry Prize), No Other Life, (William Carlos Williams Award), Pleasure, and Even So: New and Selected Poems. His latest chapbook, Adversary, was recently released by Miramar Editions. His print work is represented in collections including the Museum of Modern Art, the Victoria and Albert Museum and The Getty Center for the Arts. In 2009 he received the Shelley Memorial Award from the PSA. He teaches creative writing, and directs the Cowell Press at UC Santa Cruz.