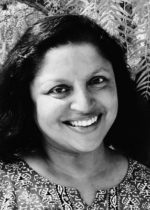 Devi S. Laskar is a native of Chapel Hill, North Carolina, and holds an MFA from Columbia University. The Atlas of Reds and Blues—winner of the Asian/Pacific American Award for Literature and the Crook’s Corner Book Prize—is her first novel. It was selected by The Georgia Center for the Book as a book “All Georgians Should Read,” long-listed for the DSC Prize in South Asian Literature, and long-listed for the Golden Poppy Award presented by the California Independent Booksellers Alliance. The Atlas of Reds and Blues was named by The Washington Post as one of the best books of 2019, and has garnered praise in Time magazine, The San Francisco Chronicle, The Guardian, and elsewhere. A former newspaper reporter, Laskar is now a poet, photographer, essayist, and novelist. She now lives in the San Francisco Bay Area with her family.