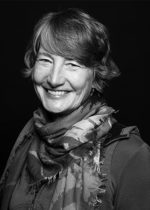 Christine Hemp has aired her essays and poems on NPR; she has sent a poem of hers into space on a NASA mission to monitor the birth of stars; and her program Connecting Chord has united cops and youth offenders—in Britain and the U.S.—through poetry. She is a speaker for Humanities Washington; her talk, “From Homer to #hashtags,” addresses our rapidly changing language. Hemp’s debut memoir, Wild Ride Home: Love, Loss, and a Little White Horse was released this spring by Arcade/Skyhorse. Her work has appeared recently in the New York Times, Salon.com, and Psychology Today. She teaches at Hugo House Seattle and the University of Iowa Summer Writing Festival. She lives on Washington’s Olympic Peninsula with two horses, two cats, and one husband.