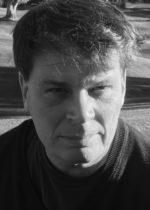 Brian Rogers is the author of The Whole of the Moon (University of Nevada Press, 2017). A former stand-up comedian, he has been the recipient of the Gold Medal prize for Best Novel-in-Progress from the Pirate’s Alley Faulkner Society and the George Bennett Fellowship (Writer-in-Residence) from Phillips Exeter Academy. His short play Come Back, Burt Lancaster has been featured in a number of festivals and showcases. He is the author of Inhabitants of the Earth, a chapbook of flash fiction. Brian attended the graduate writing program at San Francisco State University. He attended the Community of Writers in 1995 and 2002. www.brianerogers.com