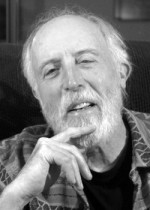 For years Bill Yake directed investigations into the toxic contamination of water, fish, and sediment for the Washington State Department of Ecology while writing poetry on the sly. Now his hidden life and perceptions have been revealed in two collections of poetry; This Old Riddle: Cormorants and Rain(2003) and Unfurl, Kite, and Veer (2010) both from Radiolarian Press, Astoria OR. His poems have been published widely in magazines and anthologies serving the environmental and literary communities – from Wilderness Magazine to Anthropology and Humanism, from Open Spaces Quarterly to Fine Madness, fromRattle to ISLE – Interdisciplinary Studies in Literature and the Environment. Recently two of his tree-inspired poems were featured in Between Earth and Sky, a book by the instigator of forest canopy research, Nalini Nadkarni. Bill’s poetry has also won the Alligator Juniper Award (2003) and the James M. Snydal Prize (2004), and his poem “The Lowly, Exalted” was featured in anexhibition celebrating invertebrates in art.