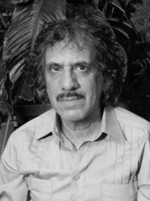 Andrew Kaufman (’01/’08): Andrew Kaufman’s Cinnamon Bay Sonnets won the 1996 Center for Book Arts award and was followed by Earth’s Ends winner of the 2005 Pearl Poetry Prize. His most recent book, Both Sides of the Niger, was published by Spuyten Duyvil Press in 2013. He is currently completing a book of poems based on his encounters with genocide survivors and perpetrators in Rwanda and sex-slavery survivors in eastern Congo. An NEA award has made possible the Third World travel reflected in his poems. He earned his MFA in poetry from Brooklyn College, his Ph. D. in English literature from the University of Toronto and has taught at a number of colleges and universities. He lives in New York City and attended the Community of Writers in 2001 and 2008. www.andrewkaufman.wordpress.com