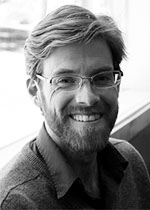 Alan Grostephan is an Assistant Professor of English and Creative Writing at Agnes Scott College. He has also taught at Knox College and St. Paul University in Minnesota. TriQuarterly Books/Northwestern University Press published his book, Bogota: A Novel, in 2013, which was longlisted for the PEN/Robert Bingham Prize and was chosen by the Wall Street Journal as one of the best ten books of fiction of 2013. Alan has an MFA from UC Irvine, and attended the Community of Writers at Squaw Valley in 2009.