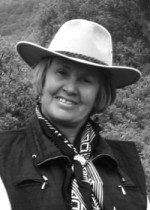 EDDY ANCINAS grew up the Bay Area, received her BA at the University of Colorado and moved to the mountains in 1962, where she lives with her husband, Osvaldo, near Olympic Valley. She is a non-fiction writer specializing in travel and ski-history. Her award-winning book on the history of two ski areas (now one), Tales form Two Valleys ~ Squaw Valley and Alpine Meadows, was published in 2013. A travel memoir of her adventures with two other women in Peru will be published in 2023. Eddy’s articles on travel in Argentina, Chile and Peru have appeared in the San Francisco Chronicle, Boston Globe, LA Times, Atlantic Monthly, as well as six editions of Fodor’s Argentina Guide. Her story of a cattle round up in Elko, Nevada won the 2010 Nevada Magazine Writers’ Contest. Eddy has been a Board member, participant and attendee of the Community of Writers for over 40 years. She is also VP of the SNOW (Sierra Nevada Olympic Winter-sports) Museum Board.