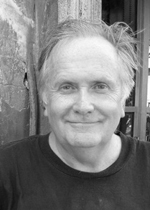 Fred Marchant (’92): Marchant’s most recent book of poetry, The Looking House (Graywolf Press, 2009) was named by Barnes and Noble Review as one of the five best books of poetry in 2009, and The San Francisco Chronicle named it one of the ten best. Marchant is also the author of Tipping Point, winner of the 1993 Washington Prize in poetry, and Full Moon Boat (Graywolf Press, 2000). A new and selected volume, House on Water, House in Air, was published by Dedalus Press, Dublin, Ireland, in 2002. He poems and reviews have appeared in such journals as AGNI, The American Poetry Review, Gulf Coast, Harvard Review, Ploughshares, Poetry, and Salamander. Marchant has co-translated (with Nguyen Ba Chung) From a Corner of My Yard, poetry by the Vietnamese poet Tran Dang Khoa, published in 2006, in Ha Noi, Viet Nam. He is also the editor of Another World Instead: The Early Poems of William Stafford, 1937-1947 (Graywolf Press, 2008. Professor of English and the Director of the Creative Writing Program at Suffolk University in Boston, he has taught workshops at various sites across the country. In 2009 Marchant was co-winner of the May Sarton Award from the New England Poetry Club, given to poets whose “work is an inspiration to other poets.” www.fredmarchant.com